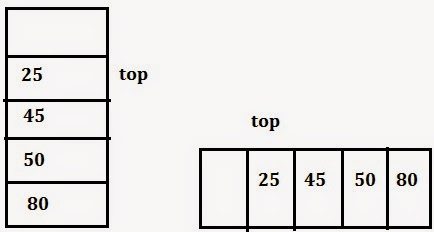 Nodes store data which can be integer value, float etc. and allowing nodes to be inserted and deleted from one end of the linked list ie; the top end will make a linked list behave like a stack. This is called implementing stackc using a linked list.

What functions do we need in our program?
We need a function to insert nodes at the beginning of the linked list
A function to delete nodes at the beginning of the list
and a display function to display the elements.
If you know linked list or you understood the previous tutorial on linked lists then you very must know how to make those functions listed above.
The only difference is that instead of naming the pointer variable start which holds the address of the first node, here we named it as top as it sounds more appropriate in the case of stack.

Structure of the nodes
struct node
{
int info;
struct node *link;
}*top=NULL;
Pointer top is of type struct node and it is assigned the value of NULL. Remember here we have declared and initialized top in global section of the program so its not local to any function all the functions will have access to the top variable and its value will be updated without returning the value of top in the functions.

You should know that in case of a linked list memory is dynamically allocated during run time with the help of malloc() function but if there is no memory left to be allocated or the system runs out of memory then malloc function returns NULL value and it is assigned to temp so if temp is equal to null it means there is no memory left and stack is full.
If it is not full then malloc() returns the address of the allocated memory location and assigns it to temp.
temp->info = num;
temp->link = top;
top = temp;
temp is the newly created node and num is the number entered by the user which is going to get stored in the node which the help of  the statement temp->info = num 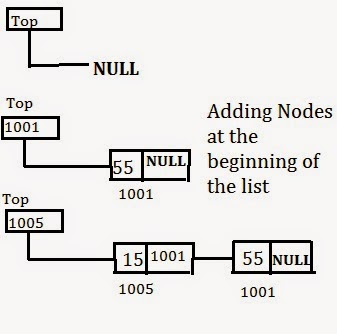 Deletion from the top or from the beginning of the list.

If top is equal to null then list is empty and its an underflow condition for a stack. 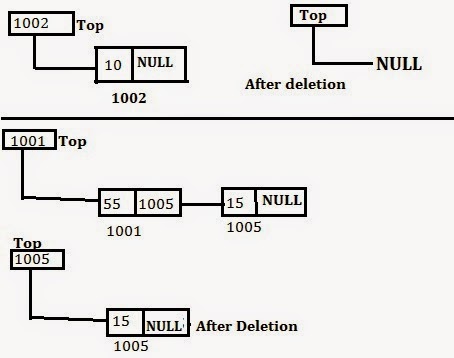